I’m sorry for not posting in a very long time. (Seriously, I’m afraid to look at the date of my last entry!) But it’s been a very busy summer for me.

What have I been up to?

Well…I made friends with a sea lion.

Her name is Cassie. She put her head on my shoulder like that totally spontaneously. I think we’re going to run away together.

I also swam with dolphins…

This is WAY scarier than it looks on TV or in the movies. At least for me. J’s reaction to this was pretty much, “Yay! Whee!” Whereas mine was, “Oh my God, I’m going to die!!!” Also, I was worried that my contact lenses would fall out. (They didn’t.)

All this was part of the Ultimate Trainer for a Day experience at the Atlantis Resort on Paradise Island in the Bahamas. The experience was pretty expensive–around $400 per person, I think–and that’s on top of your resort costs, which are also pricey. But if you have the money, I wholeheartedly recommend it. Atlantis has got something for everyone. The Trainer for a Day experience combines several of their other experiences into a full-day event. (So by the time you add up what the costs of the other experiences would be, plus the things you get to do on this one that you don’t get to do during any of the others, you come out ahead.) 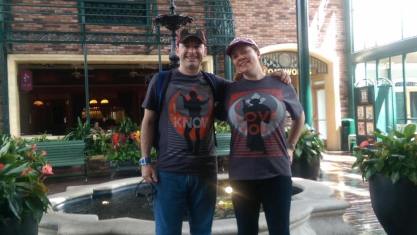 But seriously, how could we resist?

(Who says Sytherins have all the fun? Ravenclaws can be bad, too!)

This photo was taken at a bookstore called Horray for Books! in Old Town Alexandria, Virginia, during a Harry Potter-themed scavenger hunt to celebrate the release of Harry Potter and the Cursed Child. I hadn’t known the store was there before, but it was fantastic! They had the whole placed decked out with recommendations for Harry Potter fans, as well as tables with recommendations for readers from each of the houses (“Ravenclaw Reads,” “Gryffindor Reads,” etc.)  It’s a big storefront, particularly for that area, and has extensive sections for both children and adults. I’m definitely heading back there as soon as I can.

J and I may have also painted one of our walls TARDIS blue.

It’s bigger on the inside?

In my defense, I didn’t pick the color because it happens to match the time travel device of my favorite Gallifrayian. I picked it because my ideal home is one in which it looks like a Crayola box has thrown up. I like color. Lots of color. BRIGHT colors!

But, unfortunately, our living room is not that big, and we don’t get a whole lot of light. (We’re in a middle-unit townhouse-style condo, so the sliding glass door is the only natural light we get in the living room. We also live in an area with a lot of trees and shade.) So I figured painting the whole room blue might be overwhelming–much to my disappointment. Plus, painting the whole living room/dining room/upstairs hallway (since it’s an open floor plan) would have been an ordeal. So we started with an accent wall.

I love the blue color, but I’m still trying to decide how I feel about it in relation to the rest of the room. The rest of the room is a beigey-brown color, so I’m wondering if it should be a cooler tone? Or should I just be brave and paint the whole room blue? I’m just not sure. But maybe I’m just still adjusting to the change.

But I guess it’s fitting that our wall became TARDIS blue, because we also did this:

Yes, J and I got our photos taken with Peter Capaldi and Jenna Colman at Awesome Con in June. We also sat through the (very crowded, very late, and unfortunately shortened) Q&A session with them. My impressions: Capaldi seems much more gregarious than his “Doctor Who” character, and Coleman much more reserved. But what really struck me was the chemistry and the easy rapport between them. It’s easy to see why the relationship between the 12th Doctor and Clara seemed much more real than the relationship between Clara and the 11th Doctor. The 11th Doctor was Amy’s Doctor. I believe the 12th, for better or worse, will remain Clara’s.

So that was my summer. But I feel like I’m missing something. What was it? Give me a minute…oh yeah…

Reader, I married him. Yes, J and I got married back in July. (Our travels were, in fact, our honeymoon.) It was an amazing day. I am so lucky to have the coolest husband on Earth.

I am seeing the light at the end of the tunnel for The Demon Within.

It’s been a productive weekend. I’m ironing out the draft, making sure all the transitions are clear, smoothing out scenes. I’m proud of myself, because I managed to work the title of book 2 into one scene 😉

My final deadline is December 1. I’m sure my editor will make tweaks after that, but that’s when I have to get my final in to him. That’s the version that will be going out for review. I’m hoping to be done sooner than that.

Part of my problem is that I’ve been going in the marathon pace for so long, I don’t know if I have the energy to sprint to the finish. Nonetheless, the finish isn’t far away.

After that…I think I’ll need to work on some other stuff, away from the Dale world for a while. Sort of a palate cleanser. I’ve been wanting to write a holiday romance. Obviously, even if I manage to accomplish that, it wouldn’t be out until next year, but I might as well take advantage of the spirit of the season and all the Hallmark movies for inspiration.

Problem is, I don’t know if I can write a straight romance without killing a whole bunch of people.

(Note to any law enforcement entities reading this: I only kill fictional people, I swear.)

(Addendum to note to any law enforcement entities reading this: …but I do kill a lot of fictional people.)

I miss writing for fun. I miss writing with no pressure. I need to do that for a minute before I can give myself back to Dale and company.

As for what comes next as far as The Demon Within goes…I’m not exactly sure. Promotional stuff. Reviews and interviews, I hope. Maybe a release party? This is the first time I’ve done this, folks. I am flying completely blind–and largely panicked.

This is what my next several months look like:

Excuse me while I go breathe into a paper bag.

So…it’s been a while since I’ve written.

Yeah. Sorry about that.

But in fairness, I’ve been pretty crazy busy…and I do have a “Doctor Who”-themed post in the hopper that I just have to get off my lazy butt and post. But it’s probably going to be formatting/photo intensive, so I haven’t. Formatting and photo posting aren’t difficult in WordPress, but tracking down the photos I want to use can be.

And as I said, it’s been a very busy summer.

So here’s what I’ve been doing…

1) I got engaged!!!!!! My then-boyfriend/now-fiancé proposed at Disney World, at the Cinderella’s Royal Table restaurant. There was a glass slipper and everything! How friggin’ cool is that??? 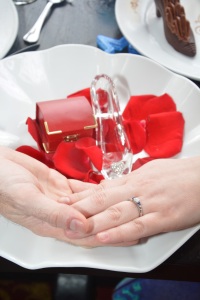 I took my time with the whole relationship/engagement/marriage thing. I spent my 20s dating all the Mr. Wrongs, and I’m glad I did it, because now I know, without a doubt, what an amazing and wonderful guy my fiancé is. I also know that I’ll never wonder about that “greener grass” on the other side. Been there, done that, not sorry.

My parents were similar: my mom was in her mid-30s, and my dad nearly 40, before they got married. They had both been married and divorced before. (In this case, my fiancé has, but I have not.) But after they met, they were engaged after one month, married after five, and I popped out almost exactly nine months after their wedding, a honeymoon baby if ever there was one. I asked my mom a few years ago how she would know, after such a short time, that my dad was the one. She gave me this sort of wistful smile and said, “I just knew.” She clarified that they had talked about marriage and life and their outlooks and whether they wanted to have children, etc., all that important stuff married couples should know about each other before they walk down the aisle, but her first, gut reaction was straight intuition. And that’s how I feel about my fiancé: I just knew. He’s not perfect: I am neither blind nor willfully ignorant to his faults. But I see him, and I still know. And I don’t think I could have had this experience, or this conviction, if I’d gotten married young and not had the life experiences that I did.

2) I went to Disney World. Because that’s what everyone does when they get engaged, right? Right? I went to Universal Studios, too. Although the technology and rides are more sleek and cutting-edge at Universal, the customer service experience is still vastly better at Disney. I also highly suggest you wait to visit the “Harry Potter” attractions until some of the hype has passed. Sometime around 2018 should be great.

3) I went to a wedding. Uhhh…not mine. C’mon guys. Give me a little time to breathe here, all right??? I just got engaged! My fiancé was the best man for a friend’s wedding in Natural Bridge, Virginia. Beautiful wedding, beautiful location, and I had a great time. I had met the bride and groom before, but it was great to meet so many of my fiancé’s other friends and acquaintances.

4) I found my history. My fiancé and I decided that we needed some time to ourselves, so we went to Charlottesville, Virginia, for the long weekend. We went to Montpelier, the home of the 4th President, James Madison. Very cool experience, especially since I have lived in the DC area for 10 years now and I’m a total American history geek. We tried to go to Monticello, Thomas Jefferson’s home, but when we got there we found out that the earliest house tour we could get was over three hours later! So we spent about an hour or so hanging out in the museum instead. In the Battle of the Founding Fathers, James Madison takes this round, but when push comes to shove, I’ll always pick John Adams for the win. I do so love an underdog.

So yeah, my breather didn’t last too long. So to close out the long holiday weekend, we booked a wedding venue and a caterer. (The best part: taste testing! Yum!) Now that we have a date, a venue, and a caterer, the hard stuff is over with. Right? Right? (Please don’t tell me otherwise; I love living in my happy fantasy world DON’T TAKE THAT AWAY FROM ME!!!!!!!!)

I am still working on The Demon Within–though, I’ll admit, with everything else going on, not as much as I should have been recently–and we’re still on track for an April 12 release. Now that I’m settled at home for a while, and we’ve got some of the big wedding stuff out of the way (and it’s still 10 months away), I should be able to concentrate more on my real job.

That is, in between looking at photographer websites and TheKnot.com. I’m sure I’ll be able to squeeze the whole “writing” thing in somewhere.