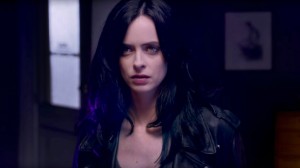 I’ve been hearing about the new Netflix series, “Jessica Jones,” for the last couple of months now. And I. Can’t. Wait. It kind of looks like “Veronica Mars” (which I also loved) meets Marvel. It can’t be a coincidence that Krysten Ritter, who plays Jessica, also played a supporting role on “Veronica Mars,” and returned in the movie last year? No, absolutely not.

But I think what really appeals to me about it is that, just from what I can glean from the trailers and the little bit I’ve read about the character’s backstory in the comics, Jessica seems…incredibly screwed up. Also, incredibly badass.

Did she just take out a bar full of huge, drunken men; turn on Joan Jett’s “Bad Reputation”; and take a shot while her knuckles were still covered in blood??? Oh yeah, I think she did.

Note the whiskey bottle on the nightstand. Also, I kind of want to do that to my alarm clock every day. Of course, my alarm clock doesn’t go off at 3:00 in the afternoon. (I’m also loving the dissonance between the sickly sweet song and the clock smashing. Awesome.)

Yes, he’s the bad guy, but even in this voiceover he’s still almost unbearably sexy. And is it weird that I half expected him to offer to whisk Jessica off in the TARDIS to see all of time and space? Anyone? Bueller? Bueller?

But I think one of the biggest reasons this series appeals to me is because it seems, more often than not, that heroines have to be perfect and likeable all the time. I do believe that imperfect or unlikeable female characters have a harder time being accepted in our cultural landscape than male ones, and it bothered me.

The Demon Within is coming out in less than seven months now, and it has one of those imperfect heroines. Dale is, quite frankly, really screwed up, and I spend so much time in her head that I forget sometimes just how screwed up she is. She blacks out and kills people. And even if it’s people who, arguably, “deserve” it, normal, psychologically healthy people don’t do this, because we realize it’s not the way to live in a  functional society. And instead of facing the music the first time she killed–when she was still a minor and might have gotten off easier–she changed identities and went on the run, avoiding the law for more than a decade and killing six more people.

In spite of all this, I find Dale to be, at times, both likeable and sympathetic. She wants so badly to be a normal person, but her own mind is out of her control sometimes. On the other hand, she’s got a core of protectiveness for others that she can’t eliminate, and it’s seeing other people being hurt/victimized that trigger her blackouts.

But ever since I wrote the first draft, I worried that readers would have a hard time accepting a character like Dale.

But seeing the trailers for “Jessica Jones”–just the fact that this show exists–shows me that maybe there’s room for characters like Dale: fundamentally flawed, fucked-up, and female.

PS: Can I say that I’m absolutely loving the depiction of NYC shown in the below teaser. It reminds me a lot of Sin City, but a little more cartoon-y. Not quite realistic but totally atmospheric. It seems like the creators realize NYC can be a character in and of itself. 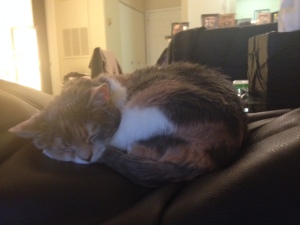 I’ve been pretty busy over the last week or so, and I’ve been exhausted. Some quick updates:

–“Doctor Who” series 9 is amazing, and I’m glad that many of my pre-season wishes have already started to come true. This looks like it’s going to be Capaldi’s season, and Michelle Gomez has, in the first two episodes, stolen every scene she’s in. With news of Jenna Coleman’s upcoming departure, I’m starting to read a lot more into her interactions with the Doctor. So Clara died, again. Foreshadowing, or just coincidence?

–Part of my hectic week was dealing with kitty illnesses. Our elder cat, Annabel, has had kidney disease for the last 2 1/2 years. Last week, she stopped eating, became lethargic, and was hiding under the bed. We took her to the vet and they found out her kidney values had spiked to double what they were a few months ago. After two days at the emergency vet/vet hospital, a day of fluids, and some appetite stimulant, she’s gotten back to normal. They discovered her blood pressure was high, and we have her on meds now, which has also seemed to help. But otherwise, they don’t know why her values spiked, or what caused her illness, whether it’s just a part of her disease or if something else triggered it. That’s the bitch of kidney disease: it’s degenerative, so you’re always just waiting for that other shoe to drop. But Annabel is doing much better now, so we’re just taking things day by day.

–Speaking of, one of the things that makes me happy is that my fiancé feels the same way about animals–and specifically, about our animals–as I do, that they are part of our family. Volunteering at the animal shelter teaches you very quickly that not everyone feels that way. But J. does, and I don’t think I could marry anyone who treated them otherwise.

–Had a very lively discussion on my Facebook author page the other day about what movies/TV shows/books should be “required viewing” to have more of a cultural consciousness/awareness. One I forgot to mention on the page: the Harry Potter series. Certainly they’re not my favorite books, but you’re really living in another universe if you don’t get all the Muggle references that you hear nowadays.

–Speaking of required viewing, I am very much looking forward to the “Jessica Jones” television series that will be debuting on Netflix in November. The premise reminds me of my beloved “Veronica Mars,” but it looks like it’ll be even more badass than that. And hey, I do know a thing or two about violent, eff-ed up heroines. Plus, David Tennant. Need I say more?