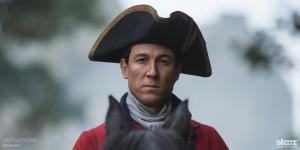 First of all, I’m going to say SPOILERS if you haven’t read the book or watched the last episode of the television series.

I came across an interesting post on Facebook from Diana Gabaldon, the author of the Outlander book series.

Well, we seem to be getting a lot of interesting reviews on Episode 12–which is All Good, to be sure. I just want to make _one_ thing clear, before drawing your attention to a couple of interesting ones: To wit, Black Jack Randall is _not_ a homosexual.

He’s a pervert. He’s a sadist. He derives sexual pleasure from hurting people, but he’s not particular about the gender of a victim. (Personality, yes–gender, no.)

I see reviewers assuming that he told Jenny repeatedly… to turn around, during their encounter in a flashback–and they assume it was because he’s gay. Actually (and obviously, I would have thought…), it’s because she’s looking at him and laughing, and he finds this unnerving.

If you look at his behavior throughout the book (and I emphasize book, though it’s almost the same in the show), he’s shown as attacking four people: Jenny, Jamie, Claire, and another prisoner at Fort William (who we don’t hear about in the show) named Alex.

Two men, two women–he’s an equal-opportunity sadist. However, given his position (garrison commander) and the structure of the culture he’s in, he has much easier access to male prisoners, whom he can torture at leisure. But he’ll take women when he can get them–_vide_ his reaction to finding Claire wandering around by herself.

At the risk of angering Outlander fans–though it wouldn’t be the first time–I’m going to have to disagree.

I wrote about the “Outlander” TV series back in 2013, shortly after Starz announced it would be producing a television series based on the books, and one of the things I cited as a potential obstacle for adapting the books to screen was the depictions of homosexuality.

There are only two characters in the first book who demonstrate same-gendered sexual attraction: Black Jack Randall, and Lord Sandringham. Sandringham’s sexuality has been downplayed in the show (although I’m a few episodes behind), but in the book, one of the “amusing” anecdotes is about how a teenaged Jamie barely escapes being raped by Sandringham by inducing a bout of diarrhea. So funny! Ha, ha…er…*cough.* Guess I don’t have that 18th century Highlander humor down.

Black Jack Randall is another kettle of fish altogether. Gabaldon calls him a “sadist,” and he is certainly that. But the book itself belies the idea that he’s an “equal opportunity sadist.” When he attempts to rape Claire, and in Jenny’s recollection of her attempted rape, both women state that Randall did not/could not become erect. Meanwhile, he doesn’t have this problem later when his sadism is turned against a male character. If there’s confusion about Black Jack’s sexuality, it’s a confusion rooted in the text.

For what it’s worth, I think “Outlander” is an amazing show, and an amazing book. Watching a show with a strong, well-developed female lead, told from the female perspective, has been great. But just because you enjoy a show, or a book, doesn’t mean it’s beyond criticism. I’m glad that the show is generating this conversation about sexuality, because it shows that we’re seeing things that would have flown largely under the radar in 1991 when the book was first published.