Disney has just unveiled the official poster for The Force Awakens.

OMG, EVERYONE IS BACK!!! There’s Han and Leia and Chewie and R2-D2 and C-3PO and…wait, where’s Luke?

Daisy Ridley as Rey is front and center, with John Boyega as Finn right beside her. She looks incredibly badass. Love that! She also very strongly resembles the Skywalker women, particularly Natalie Portman as Padme. Coincidence? Probably not. (Just hope she’s a stronger character than Padme. Natalie Portman deserved so much better.)

The way Kylo Ren looms over all of them…very interesting.

Is that another Death Star?

But here’s my rant: I discovered the new poster on this Yahoo article. Scroll through the comments section (which one should probably never do if one wants to keep one’s sanity), and you’ll discover comment after comment of racist, sexist garbage, basically all equating to the same thing: “How DARE they make a Star Wars movie with a female lead and a black lead!!! Damn you, PC Hollywood liberals, diversifying everything I hold dear!!!”

I am a woman who loves science fiction and fantasy. I have also loved Star Wars for a very long time. If Rey gets to take a more prominent role in the new trilogy, even the lead, that would be AMAZING! Honestly, in the pre-Katniss era, who were the female leads of sci-fi/fantasy? Ellen Ripley, of course. Sarah Connor, maybe, although she always played second fiddle to her own son. Leia got to do some cool stuff, but she was never the lead of the movie. To make matters worse, the big thing most people remember is Leia in her slave-girl gold bikini, when she was held captive by Jabba. 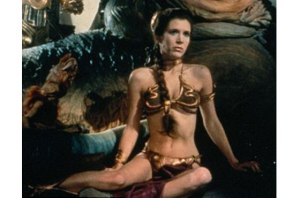 Is this what comes to mind when you think of Princess Leia? Yeah, I thought so.

And if John Boyega as Finn is the lead–which was my speculation upon seeing the second teaser trailer a few months ago–that’s also amazing. I recently had a conversation on Facebook about this article discussing why Hermoine Granger was cast as white in the Harry Potter films. The answer, I think, should be obvious: our media and culture assumes everyone is white unless proven otherwise. And in some cases, we take it a bit farther and assume everyone should be white unless proven otherwise.

The leading roles in the Star Wars universe have all, up until this point, been playing by white actors. So…a long time ago, in a galaxy far, far away…they had exactly the same racial dynamics as we do in the United States in the present (or 1977/1999)? Really? Not all heroes have to look like blond-haired, blue-eyed Luke Skywalker. Good for J.J. Abrams for figuring that out.

And you know what? I’ll cop to doing the same thing. When I read a book sometimes, I have to check myself, because I’ll assume Character X is white, and then get caught off-guard when a description tells me something else. But I realize that this is my own failing, and it’s something I try to work on.

Representation is important. It helps to eliminate the “otherness” of other cultures, races, religions, sexualities, etc. It also helps you broaden your horizons and realize that not everyone is exactly like you.

The bottom line is this: if you write off a movie, or a book, or a TV show, because the main characters don’t look like you…that’s on you.

Look, the new Star Wars movie may suck–God knows, the prequels did. But it won’t be because of the race or gender of the lead characters.