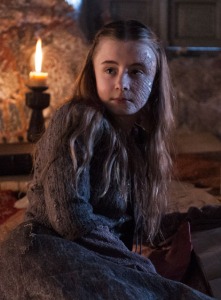 “Game of Thrones,” what am I going to do with you?

And then there was Dany’s battle with the Sons of the Harpy in the fighting pits. Pretty much everything that happened from the point the Harpies showed up onward was perfect, but I didn’t think it would equal or potentially top last week’s Hardhome battle…until Drogon, Dany’s long-missing dragon, showed up. The final shot of Dany climbing onto Drogon’s back and taking off, with Tyrion and the others staring in awe, is going to go down as one of the most memorable images in the show’s history.

It’s not often that a show can have two of its best endings in its run two weeks in a row.

But before we got to see Dany fly off into the sunset with her dragon, we had to watch Stannis Baratheon burn his own daughter at the stake. Shireen has always been a memorable supporting character, the one thing that humanized the stiff, uncompromising Stannis. (Also, she’s still alive in the books, though in fairness, as the show is beginning to pass the timeline of George R.R. Martin’s novels we’re probably going to be seeing more and more of that.)

I’m not sure how I feel about it. The scene is horrifying, and it’s meant to be horrifying. That horror is not mitigated or downplayed, with even Stannis’s crazy wife Selyse begging for mercy. It also highlights just how unsuitable Stannis would be for kingship, in a season where he’s actually started to look like a reasonable contender. King Tommen is too young, too green, and too bendable to everyone else’s will. Dany has spent the season imploding in Meereen. And every other contender is dead. I won’t say Stannis was starting to look good, exactly, because Stannis always struck me as a drip. But with his firm command of his people, he was starting to look like a more seasoned, capable leader than Dany or Tommen. But this episode proves that he’s too much under the thumb of Melisandre—not to mention too selfish and cruel—to be an effective ruler.

But the problem is, I just don’t buy it. Shireen is the one character on the show that he’s ever shown any affection toward. He’s continually protected her from his wife’s cruelty, and just a few weeks ago refused to allow Melisandre to sacrifice her. The loss of their supplies at the hands of Ramsay Bolton was a significant one, and Stannis’s rationale in sacrificing Shireen is that it will save all his men—and he’s obviously torn up about it. That said, if he would just give up his claim to the throne, he wouldn’t have to worry about being attacked by the Boltons in the night. Furthermore, does he really think that burning his own child at the stake is going to endear his men to him?

Stannis may be a drip, and he may be a zealot, but nothing up until this point has shown me that he’s far enough gone to sacrifice his own child.

Honestly, I’m not sure how I feel about this one yet. But at least I got a badass dragon flight as a consolation prize.